Conrad Murray - his book of lies & his EPIC FAIL!! 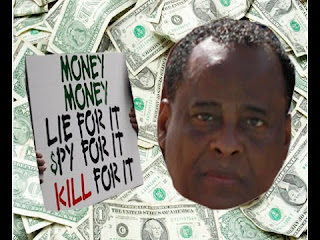 This year; we have seen yet another vulture post a book with the sole aim of profiting from Michael's death. And that vulture would be none other than Michael's killer - Conrad Murray.

Like many of Michael's fans; I was outraged at the fact that Murray would have the nerve to write & release such a book. Obviously killing Michael was not enough for him to feed his greed for money, prestige and fame. So choosing to write a "tell all" book would not only lead to great fortune and opportunities right?

Now this is guaranteed to get some back-lash from very passionate fans. But I want you to hear me out. I wasn't content with simply sitting back and allowing him to get away with his criminal activities. Let's not forget that in writing said book; Murray has not only chosen to defame Michael but he has also broken HIPAA regulations. He has revealed some very sensitive details about Michael's private health information and in turn; has broken the law - but then Murray is clearly no stranger to doing so.

So in order to get the real facts and to enable me to file a report against Murray with the Office For Civil Rights; I read the book. Yes; it was not an easy thing to do and while it meant I had to spend money to get hold of the book; if it's in the name of spreading the truth about Michael; then it's money worth spent.

Very early on in the beginning; I could feel the bile rising. The prospect of reading this book was not something I was looking forward to and made me feel sick to my stomach. But as I read through the chapters; that feeling transgressed from nausea to anger - big, white hot, blood-boiling anger. Not only does Murray write a very slanderous book in a vain attempt to absolve himself of any responsibility for his actions; he writes page after page of lies:


Perhaps the most alarming part of the book is the fact that Murray still doesn't understand how dangerous it is use Propofol without a the presence of a qualified anaesthesiologist. In fact; he goes so far as to say he'd do it again because he believes Propofol to be "completely safe". Yet in the same book; he admits that he was trying to "wean Michael off" Propofol. So which is it? Is it dangerous to the point you stop your patient from using it? Or is it perfectly safe so you'll use it in a home setting again? Make your mind up, Murray!

In short; Murray's book is a catalogue of lies. Many of his claims he has taken from debunked tabloid stories and the rest he's made up as he goes along. In addition; he fails to accept any responsibility and even goes so far as to blame Michael for betraying him because "Michael didn't tell him about other drugs he was using". In fact; he blames anyone and everyone for the death of Michael - including Judge Pastor!

Now let's look at the medical errors Murray made and chose to ignore when writing his "book":

You cannot argue with these very basic medical violations. Neither you can argue with the fact that he FAILED call 911. It is a FACT that had Murray had all the correct equipment and procedures in place AND had called 911; there is a very good chance Michael would still be alive today.

Conrad Murray writes his "book of lies" not only for profit, but also to gain public sympathy; whilst portraying himself as the "victim." The errors as catalogued above DO NOT make Conrad Murray a victim. There was only one victim and that was Michael. Michael put his complete trust in this man only to have it completely abused with tragic consequences. And as a further abuse of Michael's trust; Murray then chooses to reveal highly personal details about Michael in his book and subsequent publicity interviews.

Rest assured however; the Office For Civil Rights are now in possession of my report against Murray and I am in heavy dialogue with them. Murray may have gotten away with murder. But I will make it my mission to see he hasn't gotten away with violating Michael's privileged & private medical information. Watch this space!
Posted by Wardi at 09:59

Email ThisBlogThis!Share to TwitterShare to FacebookShare to Pinterest
Labels: AEG, Conrad Murray, Katherine Jackson, Michael Jackson, This Is It.