More unravelling of the lies of Wade Robson.

In his lawsuit against Michael Jackson and in particular MJJ Productions/MJJ Ventures; Wade Robson claims he has "not worked since his nervous breakdown of March 2012." It was during this breakdown that he suddenly "remembered" being molested by Michael Jackson.

Here we have a video from July 2012; in which Robson teaches a dance piece for The Bird and The Bees "Polite Dance Song"...some 4 months after his alleged breakdown.

This is in fact a series of videos he does for Masterclass in 2012.

And then there's this on his YouTube Channel - Wade Robson Creations - this was uploaded just 6 months ago and shared on his Facebook page on 7 June this year.

Again - a project that Wade Robson has worked on...despite claiming he hasn't been able to work since his alleged breakdown.

And then there's this - posted on his instagram on 17 September of this year: 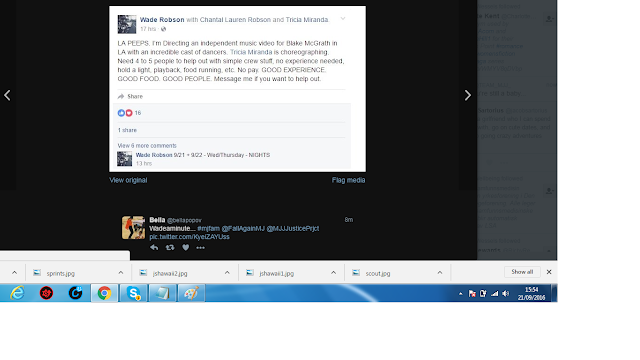 Doesn't look like Wade Robson hasn't been working to me. In fact; it looks as though he's been a very busy man for somebody "who hasn't been able to work"....
Posted by Wardi at 08:45