So now we see that Wade Robson's case against the Michael Jackson Estate is starting to unravel and at great speed. And here's a few points to consider:

September 2016 saw Robson suddenly decide to amend his claim, as we already know. In his amended claim, he chooses to drop the childhood sexual abuse claim against the Estate and instead alleges that Michael's business entities, in particular MJJ Productions and MJJ Ventures were negligent in failing protect him from Michael Jackson.

Yet there is only one problem with this: 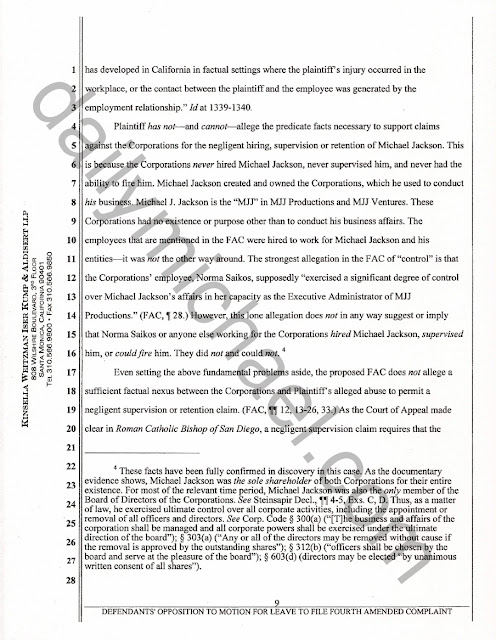 At the time of the alleged abuse, Michael Jackson was in fact a 100% shareholder of MJJ Productions and MJJ Ventures. He created and owned BOTH corporations.

Robson alleges that both corporations were negligent in protecting him from Michael, as Michael was an employee. How is this possible? That would then mean Michael Jackson as BOSS of MJJ Productions/MJJ Ventures would then have to protect Robson from Michael Jackson as EMPLOYEE of MJJ Productions/MJJ Ventures. Unfeasible, since only Michael had the power to hire and fire at both corporations.

Next we look at Robson's move to amend his claim: 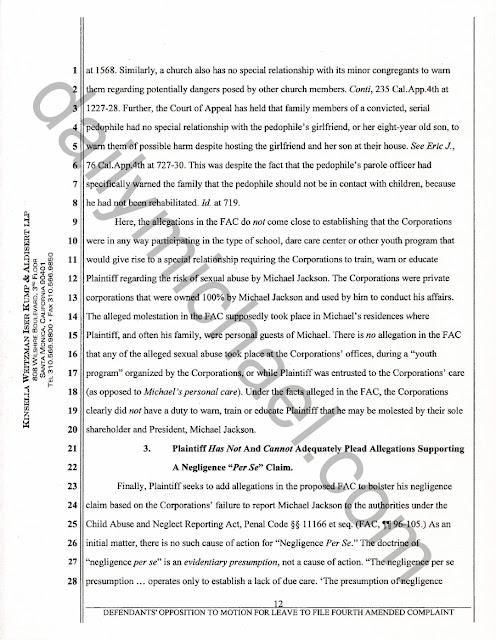 Fact is; the only time the plaintiff can amend a claim is when they have new evidence to support their amendment. We still don't have any evidence of the alleged abuse by Michael Jackson, hence the reason for dropping that particular claim. But what about the claim of negligence? Again, we are still to see Robson PROVE this. 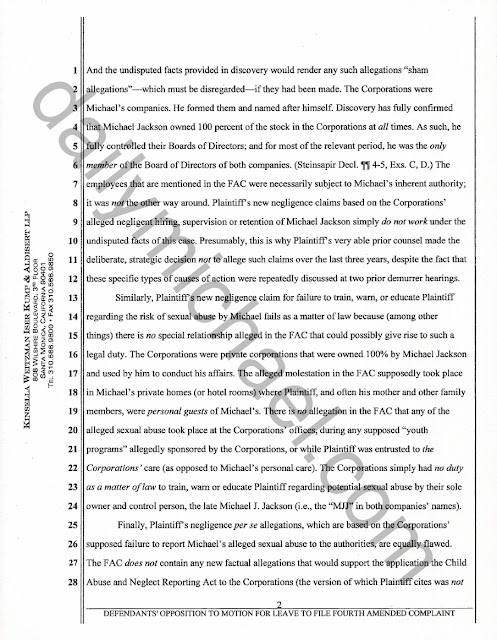 Simply put, unless there is any new factual allegations with regard to the sexual abuse, Robson cannot amend his claim and given the information as detailed above, the amended claim doesn't hold any water in any case.

Finally we come to perhaps the most explosive part of the Robson V MJ Estate case. You will remember that Robson decided to hire a new lawyer. And why was this? Take a look at the screenshot below:

That's right - Robson's previous lawyer WITHDREW from the case. Now why would a lawyer withdraw from such a case? Quite simply; because they don't see a) this case getting to court in the first place and b) the case resulting in a successful win.

But determined to get his grubby mits on Michael's money; Robson hires a new lawyer who decides that the best cause of action, is to launch a media smear campaign in order to hold Michael Jackson's legacy to ransom. In layman's terms, Robson and his lawyer are pushing for an out of court settlement. Of course, the new lawyer is aware that this case has more holes in it than a piece of swiss cheese. So the alternative is to report every single detail to the media, in the hope that the MJ Estate will scream "UNCLE" and offer a hefty payout.

Unfortunately for Robson, the MJ Estate are not about to do that. Like the rest of us; they want Robson to have his day in court where the defence will DESTROY him. I for one am actually looking forward to it.

I see various directions of where this is going to go. We already know that Robson's current lawyer is more interesting in trying the case in the Court of Public Opinion rather than a Court of Law. It is my gut belief that the case will either be completely dismissed on the grounds of the above. Or that should it miraculously get to trial (not confident it will), Robson will be utterly humiliated when he's proven to be a liar.

The hearing for amending the claim is due on 7th October and this will be an indication of whether or not this case will make it to trial. Either way; it is unravelling faster than a badly knitted sweater - and growing weaker in the process.

Note: Thank you to dailymichael.com for sharing these case notes on their recent blog post.
Posted by Wardi at 03:10