"All of us are products of our childhood..." 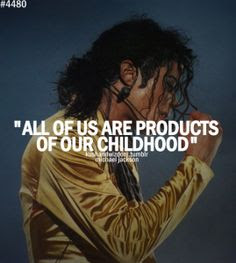 When I started this blog; I made it my oath that I would never shy away from the grittier headlines about Michael Jackson, in order to demonstrate the truth. And in today's entry, I'm going to do just that. I feel it is important for people to understand how completely misunderstood Michael Jackson was and why that lack of understanding has led to many slanderous and downright ignorant articles about him.

Three months after Michael's untimely death in 2009; various tabloid articles screamed headlines of "Michael Jackson wanted to meet James Bulgers' killers," as if to paint Michael as a "criminal" who had "sympathy" for child murderers. Said articles talked about what Michael had said in an surreptitiously taped private interview; Michael had expressed an interest in meeting with Robert Thompson & Jon Venables in order to heal them of the neglect they had received during their childhoods. At the time of this interview; both Thompson and Venables were serving a custodial sentence until they reached 18; when they were released in 2001 with new identities and on life-long license.

At no point did he condone the killing of James Bulger. In fact; it was he who sent a huge bouquet of flowers to the family of the toddler; and also donated a portion of the proceeds of his "Heal The World" single to the James Bulger Memorial Fund.

In stark contrast to what the media reported; Michael would see what the world couldn't or indeed did not want to see - that no child is born evil. He wanted to get the point across that while both Thompson & Venables were absolutely responsible for their crime; there are always reasons behind it - and those reasons stemmed back from their childhoods. The world saw the children as "evil personified" yet few dare speak of the childhoods the boys had endured when they were growing up.

Robert Thompson was one of 7 children. He came from a broken home after his father left when he was just 5 years old. The departure of his father exacerbated the issues of his already alcoholic mother and at one point, she had even attempted to commit suicide.

Robert's father was violent, frequently behaving in a threatening and intimidating manner towards Robert, and on occasions was actually violent towards the child. Robert's family life was so dysfunctional and chaotic that one child eventually had to be taken into care. When he was eventually returned back to the home; the emotional distress for the child was so great, he attempted suicide.

Jon's family life and childhood was also just as dysfunctional and chaotic. His mother, a narcissist, cared more about her love life than she did about raising her children. She too was violent, intimidating and threatening towards Jon. She had suffered various mental health problems and like Robert's mother; had also attempted to commit suicide.

Faced with his mother's threatening and menacing behaviour, Jon would regularly hide under chairs in an attempt to get away from her. The trauma of his family life became so great that he began to self-harm; cutting himself with knives

As Venables and Thompson grew up; they would often skip school, preferring to go shop-lifting. There were acts of cruelty to animals including shooting pigeons with air rifles and tying rabbits to train lines to watch them be run over - a premonition as to what would happen to their eventual human victim.

These violent tendencies are often associated with the effects of trauma, especially in the case of trauma in children. Children who have Post Traumatic Stress Disorder after being exposed to long-term, physical, emotional and sexual abuse, often develop complex symptoms such as acting out in a violent manner, poor performance at school, avoidance, violent tendencies or aggression, sexually inappropriate behaviour and self-destructive behaviour. This in turn can lead to various other psychological disorders including anti-social personality disorder (psychopathy).


I want to make it clear that I am by no means condoning what Venables and Thompson did. Murder is murder - no matter what age the killers. But like Michael did; I am demonstrating that not everything is black and white. No child suddenly wakes up in a morning and decides "right; today I'm going to kidnap a toddler, take him to a secluded spot, beat him, sexually assault him and then finally kill him."

Michael saw the bigger picture. He saw that these children have also suffered. He saw two children who had suffered terrible lives and were now victims of their own traumatic childhoods. These two children had become highly disturbed individuals as a result of what they had been exposed to when they were growing up. Having suffered in his own childhood; granted not to the extent Venables and Thompson had suffered; Michael empathised with them,

The media reported that Michael was being sympathetic with two child-killers; who were just children themselves. In actual fact; what Michael saw were two children who were psychologically damaged by what had happened to them when they were growing up. He wanted to give them what nobody had ever given them before - love.

This is a demonstration of a man who refused to see the bad in anybody. Call it naivety if you will, and yes it would be fair to argue that Michael was perhaps too trusting. We have all seen how his trust has been abused over and over again in his life.

Yes, Michael saying he wanted to meet Thompson and Venables was a very bold move. And at first glance; many would accuse him of being "crazy." But when you look at the full facts; is it really that crazy? Or is it somebody attempting to reach out to two tortured children to see beyond the global outrage and look at the two victims hidden behind a wall of trauma?

Was Michael wrong for wanting to reach out to these boys to heal their deep psychological wounds? I don't think so. I'd go so far as to say it was very brave and perhaps not as naive as first thought. The naivety is when people take things at face value without looking at the bigger picture. The fact that Michael was able to see beyond the information we were drip fed and see the "person" behind the killers; in my view, makes him indeed very, very unique. And it is only when you understand this side of Michael, can you start to understand Michael as a person.
Posted by Wardi at 08:24