Paris Jackson: Bullying is bullying; no matter who the victim is! 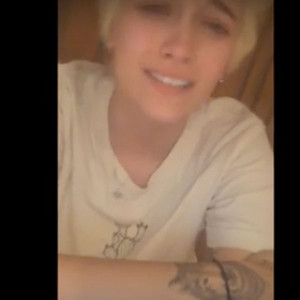 Today I want to address an issue which is long overdue. This afternoon; whilst browsing Instagram, I came across a very heart-breaking video from Paris Jackson, in which she talks about the hateful comments and bullying she has received from some followers. I then scrolled down to the comments section, to see even more hateful comments including:

Along with those comments were suggestions that she should "kill herself" and that she's a "slut in that photoshoot."

I'm going to make this absolutely clear once and for all...

There is NO EXCUSE for bullying somebody like this - EVER!!! Forget who she is. Forget she's Michael Jackson's daughter. Forget what choices she's made in her life. She's a person - with feelings. No amount of excuses will EVER justify this kind of behaviour towards her.

I am absolutely sick and tired of week after week; some folks have got a problem with whatever Paris says or does. What makes me even more sick to my stomach is the fact that some of these folks, claim to be Michael Jackson fans. Well let me also make this clear...

Anybody who verbally abuses and bullies Paris or any of Michael's children for that matter; is NOT a fan. We do not want these sort of "fans" in our community. You are not welcome. Leave NOW and close the door behind you.

It is a fact that Michael fought so hard to protect his children. When he covered their faces with masks, the world thought it was "odd". But in actual fact, he did it to prevent this from happening. I can say with 100% conviction that he would never have been happy to have his children thrust into the spotlight, so soon after his death. It is very clear that his kids were not ready for that kind of attention - physically or emotionally. Whoever was behind that badly thought out decision did them absolutely no favours, and Michael would be appalled at seeing Paris treated this way.

Paris Jackson is simply trying to live her life the best way she can. How she chooses to live her life is nobody else's business. She's growing up and establishing herself as an independent young woman. She's not a little girl any more. She can do whatever makes her happy and it is not for you to judge.
To suggest she "shouldn't post it on social media" is not only a ridiculous statement but also an ignorant one. She has every right to post whatever she likes on social media - just like you do. The only reason people don't like it is because of who she is. But that really is irrelevant. She's still a human being, at the end of the day.

The harassment of Paris needs to stop - NOW. Expressing ones opinion is one thing. But when you venture into insults and "death wish" territory; you've crossed the line into bullying. Simply put; if you have a problem with Paris Jackson being less than perfect; take a long, hard look in the mirror....