Shana Mangatal & her "relationship" with Michael Jackson - fact or fiction?

Following the release of her book "Michael and Me"; we have to consider the question which is proving to be quite the elephant in the room.

After receiving information from Joe Jackson's publicist; Firpo wrote an article in which he mentioned Shana as indeed being Michael's secret girlfriend. On hearing about the article, Ms Mangatal then contacted Mr Carr; asking him not to write about her any more. Mr Carr apologised for his journalistic mistake in not checking the information he had received; and promised to issue a retraction.

However; on receiving said promise; Ms Mangatal contacted Mr Carr again with a heartfelt plea to reconsider the retraction and leave things as they are. This was met with Mr Carr explaining that stopping such retraction was very much out of his hands and that the retraction would go head. He did mentioned that should Ms Mangatal have proof that she was indeed Michael's "secret girlfriend" that would cast quite a different light on the matter.

This was her response:

"And this will be my last e-mail to you. I'm not trying to ‘prove' anything and never was. You came to ME asking for help with YOUR article. ... Everything I told you was the absolute truth. Anything you added to my quotes were [sic] your additions, not mine. ... I never said I was Michael's ‘secret girlfriend'. You did! Why should I have to ‘prove' anything? This was all your doing, not mine."

A denial of her being Michael's secret girlfriend? Then why would she choose then to "break her silence" and write a book?

Perhaps these emails will answer that question:

When asked about these emails, Shana's response was that they are fake and her lawyer is taking action against those who posted them. My eyes and ears are very much tuned for developments on this "claim".

But what about this? Michael Bush who worked with Michael for 24 yeas and even dressed Michael in preparation for his funeral had no knowledge of Shana. Neither does his former bodyguard, his make up artist, and many others who were in Michael's circle during the time of their alleged "relationship".

Let's look at the contents of the book in detail and in particular the bits in which she claims to "defend" Michael. A lot of her followers have chosen to slate me for pointing out the truth regarding her book. But here are the facts in the cold light of day.  I take no prisoners in the process of sharing the truth. 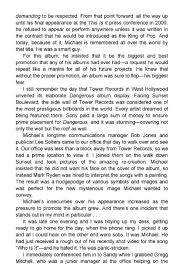 In this section; she claims Michael insisted he be called "The King Of Pop". Now where have we heard this before? Ah yes; a story circulated by various tabloids in March 2013 - some 3 years before Shana's book was released...

In actual fact; Michael NEVER claimed to be the "King Of Pop". That title was indeed given to him by Elizabeth Taylor in 1989 at the Soul Train Awards. Michael never referred to himself as "The King Of Pop". So this particular claim appears to be yet another tabloid story regurgitated for the reader.

Now let's look at claims from her supporters that she defends Michael against any child abuse allegations: 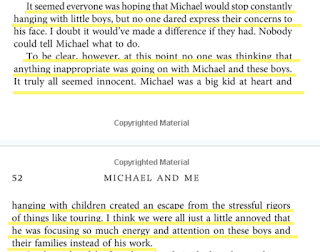 So how does this defend Michael? Not only does she bring attention to the fact that Michael had friendships with children; but she also garnishes support of her claims in stating that those working with Michael also found it to be inappropriate. She then goes on to say she never saw anything inappropriate going on with those kids, seemingly back-tracking in order to be portrayed as the "innocent party" for her claims. But yet the damage is done. The Wade Robson/Jimmy Safechuck civil suit starts next March and of course their lawyers are going to eat this up! Was Shana really defending Michael? In short, no she wasn't. At best; she was throwing out a little tid-bit of a scandal in her book and at worse; throwing him to the wolves with her statement. If she felt Michael's friendships with boys were innocent, then why mention it? Quite simply; it was with the intention of raising questions and giving the media the ammunition they want. When you're selling a book, any publicity is good publicity, right?

Of course it would only be a matter of time before she brought up the "drug addiction" stories - rather like the others before her. Tavis Smiley, Conrad Murray, Frank Cascio...the list goes on... 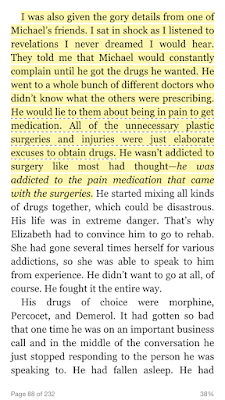 So here she states she was "given the gory details from one of Michael's friends" about Michael's "addiction to drugs." No prizes for guessing who that friend was - the same "friend" who called Michael a "drug addict" in his book....oh and what do you know...look what I found! 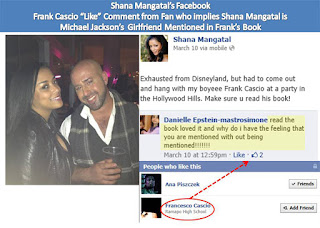 A coincidence? I think not!

Neither is it a coincidence that she talks about Michael being "drunk" and never knowing his limit when it came to alcohol. We've also heard that one before - in Frank Cascio's book. And yet here's Shana's version of Michael's "problems with alcohol." 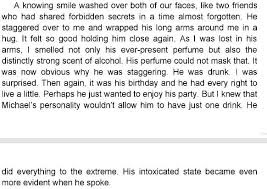 Almost a carbon copy for Frank's claims - in which he claimed he witnessed Michael "high on pain medication" and "drunk" before his war with Sony began...

Shana also claims Michael was difficult to work with and would "routinely embarrass anyone who made a mistake." 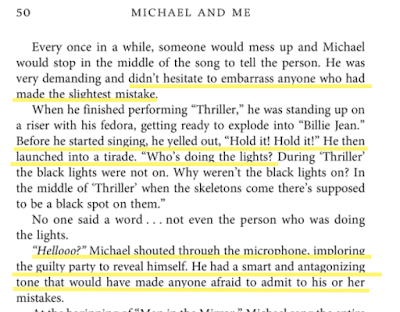 While many have agreed that if you worked with Michael; you were expected to work hard; none have gone so far as to say he was "antagonising" to the point of being a bully. Indeed; Lavelle Smith Jr. talks about the time Michael saved his life when Lavelle caught fire during a dress rehearsal. He ran over to him, rolled him over and patted the flames out.

His vocal coach, Seth Riggs called him "the most natural, loving person I've ever known..."

Vincent Paterson called him "the most polite 'celebrity' with whom I have ever worked." He also went on to say "I never heard him speak a demeaning or unkind word about anyone. Ever."

These are people who have worked with Michael for years and yet never saw any evidence of Michael "bullying" his colleagues. So why does Shana say differently?

Finally we finish with perhaps the most ridiculous claim of all - that Shana was seeing Michael during the time he was married to Lisa Marie Presley:

Okay; I see several issues with this and especially in the light of the fact that Shana mentions in her book that Michael would regularly use sex as a "bargaining tool" with Lisa. It is a fact that Michael was desperate for Lisa to become pregnant with his child. Indeed; it was the one of the largest factors which lead to the break up of that marriage - he wanted children and although she'd agreed in the beginning; Lisa did not. There are also various reports that suggest that Michael was in talks with Debbie Rowe about having children; while he was still technically married to Lisa.

Let's also look further in detail at this "affair" claim and the reasons why I believe it to be completely false.

During the days of The Jackson 5 when Michael and his brothers were on the road with their father Joseph; Michael would regularly witness Joe cheating on Katherine with groupies. Being in the next hotel room; he would often hear Joe's shenanigans and in his private phone calls with Glenda; talked about how bad he would feel having to come home and face his mother, knowing what Joseph had been up to.

Then you take into account that Joseph also fathered a love child; and the fact that at the time, Michael BEGGED Katherine to divorce Joseph. It is only because of her devout JW beliefs that they are still "married". 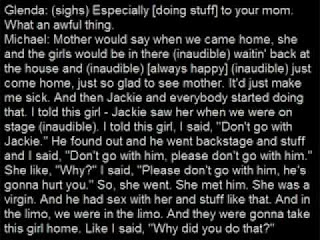 To sump up; I absolutely don't believe that Shana was ever Michael Jackson's "secret girlfriend". I believe she knew him from a professional point of view only and yes; they had a friendship in a business sense. But that is where it ended. The rest; I believe is firmly in Shana's head mixed with segments from other "tell all" books; tabloid stories and the fantasies of a stalker. Did Firpo Carr plant the seed in her head with his article? Did Shana see a golden opportunity to capitalise on a simple misunderstanding based on the wrong information Mr Carr as received? My gut feeling certainly sways me in that direction.

The question of whether or not Shana is telling the truth however is a side issue. The real issue is the fact that her book does not do Michael in any favours. Those who defend her work of fiction should open their eyes to what is really going on here. Shana is simply using her "story" as a way of manipulating the fans into parting with their money, and attracting the attention of tabloids for more publicity. She needs the help of a crane to pick up all the names she drops in the book as a further attempt to add any "credence" to her tall tails. She saw an opportunity and went with it, like many other "authors" of Michael Jackson related books do. Michael's name is very lucrative to those with dollar signs in their eyes. And why let fact get in the way of profiting from fiction?

Email ThisBlogThis!Share to TwitterShare to FacebookShare to Pinterest
Labels: Michael and Me, Michael Jackson, Shana Mangatal